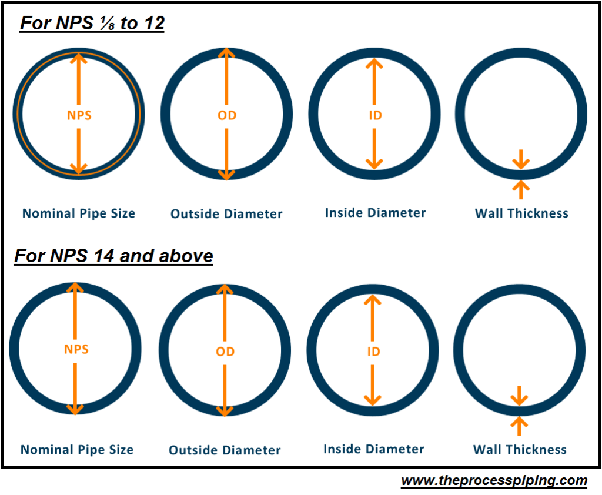 ​Nominal Pipe Size (NPS) is a North American set of standard sizes for pipes used for high or low pressures and temperatures. Nominal pipe size refers to only the outside diameter (OD) of a pipe making it somewhat vague. For example, when we say pipe size is 2 NPS, it refers to all the pipes having 2.375-inch (or 60.3 mm) as outside diameter irrespective of wall thickness and thus the inside diameter. Specific pipe is identified by pipe diameter and another non-dimensional number for wall thickness referred to as the Schedule (SCH). Pipe schedule sets the pipe wall thickness. Increasing the wall thickness of the pipe increases the mechanical strength of the pipe, allowing it to handle higher design pressures.
The terms Nominal Bore (NB) and Nominal Diameter (DN) are also frequently used interchangeably with Nominal Pipe Size (NPS). Nominal Bore (NB) is European Designation equivalent to NPS. For NPS 5 and larger, the Nominal Diameter (DN) is equal to the NPS multiplied by 25.
Initially there are only three pipe wall thicknesses in use – However with the advancement of industrial age and use of pipes in varying pressure and temperature conditions, these three sizes did not fit all applications. There have been many revisions and additions to the tables of pipe sizes based on industry use and on standards from API, ASTM, and others. Today we have a range of wall thicknesses, namely: Stainless steel pipes, due to less risk of failure due to non-corrosive property, permitted the use of pipes with thinner wall thickness. Initially thinner pipe schedules 5S and 10S had been created and afterwards other “S” sizes followed later. Stainless steel pipes are most often available in standard weight sizes (noted by the S designation; for example, Sch 10S). However stainless steel pipe can also be available in other schedules. Due to their thin walls, the smaller “S” sizes can not be threaded together according to ASME code, but must be fusion welded.
In new schedule system, Nominal Pipe Size and Schedule collectively sets the pipe outside diameter (OD) and the wall thickness (and hence the internal diameter (ID) is automatically fixed). For example, NPS 14 Sch 40 has an OD of 14 inches (360 mm) and a wall thickness of 0.437 inches (11.1 mm).
However the Nominal Pipe Size (NPS) and Outside Diameter (OD) values are not always equal, which can create confusion. ​Few general rules regarding nominal pipe size (NPS) and schedule, Calculation of Pipe Internal Diameter (ID)
For process engineers, the most important information is the pipe Internal Diameter (ID), as this is used in
line sizing calculations. As discussed above, for a given Nominal Pipe Size (NPS), the pipe Outside Diameter (OD) remains constant. As the pipe schedule changes, the ID of the pipe changes.
The ID of the pipe can be easily calculated, as long as the pipe NPS and schedule are known. The pipe ID is given
by the pipe NPS minus double the pipe wall thickness (which can be obtained from the pipe schedule).
For example, for a 12 NPS (DN 300 mm) pipe, schedule 40, the OD and wall thickness are respectively 12.75 inches (324 mm) and 0.406 inches (10.4 mm). Thus: It is worth bearing in mind that wall thicknesses come within a specified tolerance, depending on the engineering standard used. A typical wall thickness tolerance is 12.5%. This means that the actual internal pipe diameter may vary slightly from that quoted above.